Chalkboards & Snapshots from 100 Years Ago 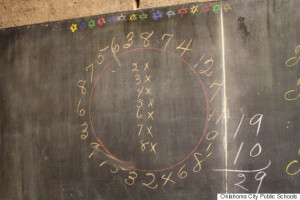 I recently read a Washington Post article that thoroughly enchanted me. “Haunting Chalkboard Drawings, Frozen in Time for 100 Years, Discovered in Oklahoma School.”

Dozens of old chalkboards were found at Emerson High School in Oklahoma City by contractors who were taking out old blackboards and installing new whiteboards. They stumbled upon  preserved lessons and school drawings dating back to 1917.

“A wheel that apparently was used to teach multiplication tables appears on one board. ‘I have never seen that technique in my life,’ Kishore told the Oklahoman.” 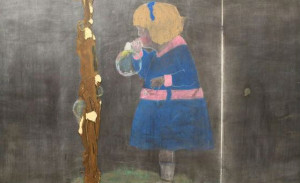 As I said, some beautiful drawings were also unearthed. One teacher, Ms. Cinthea Comer, was astounded by the colors:

“It was so eerie because the colors were so vibrant it looked like it was drawn the same day… it’s like you’re going into a looking glass into the past.”

I have a similar feeling when I work with families and their old materials – we’re going into a looking glass into the past.

Several weeks ago, I digitized a snapshot taken in Paris in 1918 by a WWI solider. The solider was the father of Phoebe Ford, a current client of ours. In an effort to understand Phoebe’s father’s story better, I searched online and found an historical film clip of the exact same moment in time. The war was officially over. The Arc de Triomphe is in the background.

While watching this silent but stunning clip, I could see her dad in my mind’s eye. I could see him standing in his woolen uniform, a little camera lodged in his right hand. I could see President Wilson approaching on his horse-drawn carriage. I could see him raising his camera, peering through the viewfinder, and “SNAP!”

Nearly 100 years later, we have this photo to help tell Phoebe’s family’s story. The school district is working to preserve the chalkboards. Let us know if we can help you preserve, and bring to life, a photo, an object, or an important story.