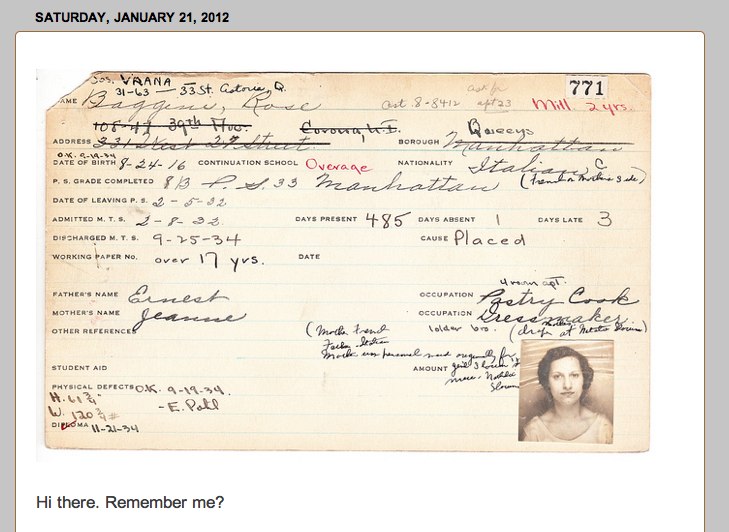 A friend of ours just sent us a link to a superb blog that we couldn’t help but share with all of you. It’s called Permanent Record: Untold Stories from a Stash of Depression-Era Report Cards. The blogger, Paul Lukas, works as a columnist for ESPN, but when he’s not writing about batting, curling or dunking, he’s got his head stuck in an box of old school report cards. Well, to be more specific, an old box of girls‘ report cards. The way it happened, way back in 1996 (geez, that’s 16 years ago!), was Paul found a cabinet full of  report cards from a defunct girls’ vocational school that operated during the 1920s, 1930s and 1940s. At the time, he had no idea what to do with them except show his friends and implore, “Isn’t this so cool?!” He kept the boxes of cards for years until he got the idea in 2009 to go deeper. This blog chronicles his adventures in finding some of the women linked to the report cards, as well as the women’s relatives.

In 2011, he wrote a five-part series about these incredible report cards for Slate. I recommend reading the articles, but definitely check out his blog. It’s the juicy stuff, the video-enhanced, photo-rich backstory that will make your eyes widen, and for some of you, inspire story-full documentation.