Stunning portraits of your family heirlooms 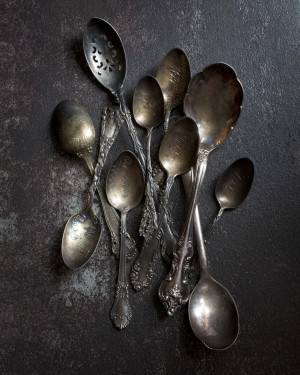 I do speak Instagram, albeit not fluently. A few weeks ago, I finally grasped the benefit of hashtags (late to the game, I know!)

{FYI, Hashtags categorize peoples’ posts. You can view images by hashtags/themes, instead of by a person’s profile. If your mind was just blown, here’s a quick guide on the matter}.

On the day I discovered hashtags, the first one I jumped on was #genealogy.

I saw a lot of what you might expect – black and white photos, family trees, old documents. Then I saw something that shot a quiver through my heart: a perfectly-lit portrait of engraved, heirloom spoons.

Veronica Olson, I soon learned, was the incredible photographer behind the Instagram profile @familygathering. Her portrait of this collection of heirloom spoons said in one glance, “I’ve been stirred by a loving hand and passed on to the next.” I clicked to see more photos by her and found a small treasure trove of what I’ve taken to calling “heirloom portraits.”

Within a week, Veronica and I were sitting side by side, eating a basket of french fries at Back Forty on Spring Street. (Lesson #2: Instagram friends can be real friends!). I was telling Veronica how impressed and moved I was by her skills as a photographer. Apparently, I’m not the only one! Williams-Sonoma and the insanely popular cooking blog Food52 have hired her to prop style their envy-worthy images.  All along, though, she’s been working to create portraits of personal family heirlooms.

“I started with my own family,” she says. 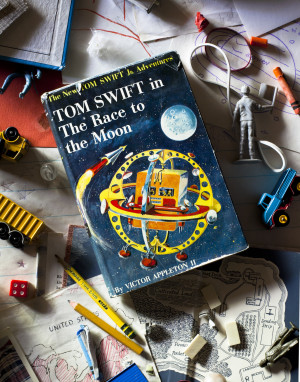 I fell in love with her portrait of a grown man’s favorite childhood book: Tom Swift in The Race to the Moon. Toy soldiers, crayons and matchbox cars were perfectly strewn about by Veronica. In doing so, she creates and captures something precious and fleeting.

What I find most significant and valuable about Veronica’s work is that she, like StoryKeep, creates heirlooms out of things that would otherwise be lost or owned only by a single family member. Original photographs and family films? Quilts made by grandma? Matchbox cars? None of these can be truly replicated. But they can be captured and made new through stunning films and photographs, and those . . . well, those can be shared with everyone.

Keep your eyes peeled for an announcement about a special offering from @familygathering and StoryKeep in the coming months!