Last month, we published an interview in which Prospect Park historian Amy Peck talked about being an “accidental” archivist and searching for a time capsule buried in 1966, among other things.

Shortly thereafter, we came across a New York Times article about plans to renovate two elements of the park’s neglected northeast corner: the Vale of Cashmere and the Rose Garden. 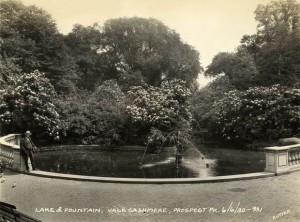 Just don’t get too close. According to the Times, the two locations are “notorious for drug transactions and sexual activity” that has “scared off local residents.”

That’s about the change.

The Prospect Park Alliance is planning a capital campaign ahead of the park’s 150-year anniversary next year to pay for improvements like refilling the Vale of Cashmere’s sunken reflecting pool, where model sailboats once tacked and jibed. (The name was inspired by a Thomas Moore poem.)

The Rose Garden, now rose-less, could become a sculpture garden, amphitheater, or something else entirely, said Sue Donoghue, president of the Prospect Park Alliance, which runs the 585-acre park in Brooklyn. 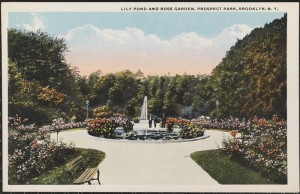 Whatever happens, we hope that the renovations will inspire park-goers to rediscover these forgotten nooks and learn more about their history.